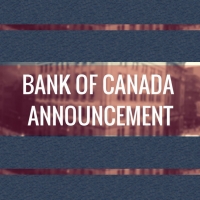 In its rate announcement and accompanying monetary policy report, the Ottawa-based central bank offered an upbeat assessment of an economic expansion that’s running close to capacity, and said borrowing costs will eventually rise. But policy makers reiterated the economy continues to need stimulus and repeated the need for caution on future rate adjustments.

Wednesday’s releases attempt to codify Governor Stephen Poloz’s narrative the nation is at the “sweet spot” of the business cycle where growing demand is actually generating new capacity as companies invest to meet sales, a process he said the Bank of Canada has an “obligation” to nurture.

“Higher interest rates will be warranted over time, although some monetary policy accommodation will still be needed to keep inflation on target,” the central bank said in its rate statement.

In the broader report, the central bank said monetary policy is “expected to support economic activity over the projection horizon,” which goes through 2020.