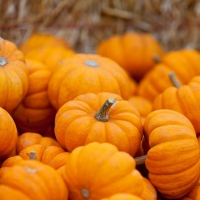 PUMPKINS ARE CROPPING UP EVERYWHERE

As part of the season, we’re seeing pumpkins appear in grocery stores all over the country. Some interesting things you may not know about this prolific gourd:
• Pumpkins are commonly thought of as a vegetable, but botanically, pumpkins are fruit.
• There are more than 2,500 farms in Canada with pumpkin patches, according to Statistics Canada. Collectively, they produce 80 thousand metric tonnes of pumpkins, with about two-thirds sold fresh to customers.
• Pumpkins are grown in every continent except Antarctica!
• According to Guinness, the World Record for the heaviest pumpkin as of Oct 2021 was grown in Italy, weighing in at 1226 KG (2708.8 lbs)
• In 2021, a 2,006.5-lb pumpkin was grown in Ormstown, Quebec, setting a Canadian record.
• The tradition of carving a gourd began in Ireland with the legend of Stingy Jack. The use of pumpkins as Jack-o’-lanterns didn’t begin until the 1800s in North America.
• Fastest time to carve one tonne of pumpkins: 3 hours, 33 minutes & 49 seconds (October 29,2008)
• Most lit Jack-o’-lanterns displayed: 30,581 (2013, City of Keene, New Hampshire)
• The Largest Pumpkin Pie: weighed 2,020-lbs and measured 12 feet, 1 inch long (October 8, 2005)

To see record-setting pumpkins from around the globe, click here.